What we’ve learned from building realtime PvP games for mobile

Smartphones are freakishly smart. The technological advances within mobile tech has made it possible to build realtime multiplayer games for mobile with increasingly impressive quality due to improved network speeds and more powerful devices. These games have also proven to be extremely popular amongst mobile gamers - Fortnite Mobile and Clash of Clans being some of the prime examples at the moment. 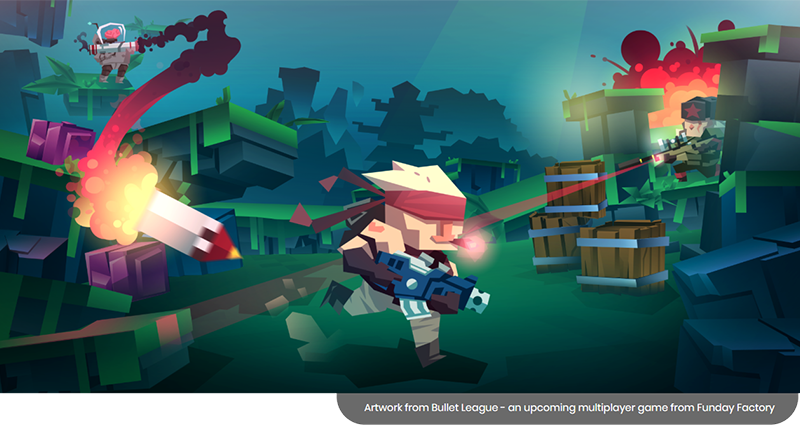 So why doesn’t every mobile developer go all in on multiplayer while it’s still smoking hot? Well, for starters, multiplayer games represent an entirely different set of challenges than single player games. Developing games with good matchmaking systems, network stability, social features, high user retention and a fun, competitive gameplay is not exactly an easy task.

At Funday Factory, we first dipped our toes into the vast sea of realtime multiplayer games when we developed Spellbinders in collaboration with Kiloo back in 2014-16. And now, we are working on two unannounced (and very exciting) multiplayer productions. Being new to making multiplayer games means that you get a ton of new challenges thrown directly at your face. You will probably be able to knock some of the challenges right out of the park, some you can catch and  put down slowly, and some will hit you smack on the nose. Either way, developing multiplayer mobile games is both complex and thrilling - here are some of the lessons we have learned from it so far.

Pick out the right network solution for what you’re building

One of the first things to consider when developing multiplayer games is which network solution to use. Photon, SpatialOS, Quantum, and the list goes on. There are a lot of solutions to choose from, so picking one can feel a bit like opening a bunch of loot boxes and crossing your fingers.

Our approach has been to carefully consider our requirements for data transfer amounts and for storage, since those are key parameters in differentiating the network solutions. Basically, the less data that is transferred, the more players you can have in your game. So for our 30+ players game, we went with Quantum which has minimal data transfer amounts.

“We have chosen Quantum as the backbone of our multiplayer experience because it allows us to send very little data between devices. That means that we can easily have 32 players playing together over a cellular network with very little lag which is crucial to the user’s experience of the game.”

More and more mobile developers are experimenting with the use of “fake multiplayer” where bots are used to enhance the play experience early on and to improve your business case since you can lower server costs. A game like PUBG Mobile is structured to pitch you against a lot of bots when you first start playing the game. This is to provide the player with a sense of being good from the start which increases retention rates. The further you progress, the more real players you will be pitched against, so in this case, fake multiplayer is used as a sort of onboarding tool that will make players want to play again.

But be careful. The use of fake multiplayer features can have a negative impact on your social features and cause some players to judge your game as “fake advertising”. Even though you have intelligent AI, there are easy ways for players to spot if your game isn’t really multiplayer - they can play in flightmode or they can be suspicious of usernames, timezones, and matchmaking time. Here’s a short list of games with different handling of multiplayer:

“The approach you take to multiplayer and building an AI that works for your game is going to be heavily dependent on what kind of game experience you’re building and what you want players to experience. Define metrics early on so you can measure on the cohorts when your game is live; e.g. does long-term retention increase when players are matched with other players in their skill bracket compared to playing against players in specific leagues or brackets?”

Realtime multiplayer games are social by nature. This means that the marketing of the game benefits from emphasising on social aspects as well. There are multiple strategies that could work well for this, but the key is to keep your user base active and to focus on the parts of your game that makes it stand out from the crowd. Setting up channels on Twitter, Discord or the like and making daily posts about new content, updates, fan competitions and feedback is a good way to engage the community and keep players motivated.

Another way to emphasise the social capabilities of your game is to make coherent use of streamers and influencers on various social media. That doesn’t mean that you have to spend $100k+  to get large Youtubers to show 30 seconds of gameplay from your game. There are many smaller influencers on platforms like YouTube, Twitch, Mixer and Twitter that are looking for interesting content and creative ways to offer something different to their fans. Identify your game’s unique selling points and use that when reaching out to influencers to offer them an opportunity for making great content. Look for statistics on average views, average engagement, number of sponsored videos and video categories which will give you a good indication on whether or not the influencers you’re considering are actually influential. Also, make sure that the influencer fits the profile of your game.

Consider the number of players

When designing your game, you have to put a lot of thought into how many players you are actually pitching against each other. The more players needed for a match, the more concurrent Daily Active Users (DAU) are required. Mobile gamers are impatient and if they have to wait for more than a couple of seconds for other players to join the session, they will dump your game quicker than you can shout “STAY!”. Then there’s the matter of matching players against others with similar skill level. This requires even more users and a good matchmaking system. If this isn’t considered, a lot of players will quickly feel too good or too bad at the game and decide to bail out.

You could say that designing for more people gives you a “free” influx of exciting events in your game, simply by way of the unpredictable interaction between a mass of people. This can be exciting and an “easy” way to give your game a dynamic feel and make sure that each game session becomes unique – even with simple mechanics. But your challenge here is to harness that chaos by designing the right boundaries, balancing and content for the players to navigate within. On the other end of the spectrum, when designing games for 2 or 4 players, you will instead be faced with the challenge of offering significant depth-of-choice still contained within a tight design to keep the game experience from becoming stale as it lacks the innate crowd dynamics.

“In a broad generalisation, you might say that more players usually means either a more tactically specialised or chaotic experience for the individual player. A lot of things become more complicated when moving beyond a two-player game, but you also gain a lot from the dynamics created by the increase in the number of players.”

To us, working with realtime multiplayer games for mobile has definitely proven to be a complex process that requires lots of considerations regarding tech, marketing and game design.

Technically, you need to choose a fitting network solution and make sure that players have a fun game experience in which they are matched with players (or AI) of similar skill - all the while keeping waiting times, lag and crashes to a minimal. That also means that you have to design your game to match the technical capabilities while also keeping a close eye on the appropriate number of players for your game, possible social features, and a fun game experience for all the different types of players. To draw mobile gamers in, you need to think hard (yeah, sorry about that) about what makes your game stand out from all the competition out there. Those unique selling points are also what you should focus on when marketing the game.

You cannot predict all outcomes, but careful considerations and lots of iterations will definitely get you a long way. Realtime multiplayer games are hard to make, but if done right they can be hugely successful and, perhaps most importantly, tons of fun to play.